I did also bring home some interesting and obscure items during my travels. I thought it would be a fun idea. To prevent some of these items as a post on this blog.

I will start with Coca-Cola bottle that I brought home from my trip to Israel in 1988. The script on the bottle is in English and also in Hebrew. Which is the main official language that is spoken in the state of Israel.

Souvenir number 2 is an actual street Kentucky Derby Sign. That was obtained by me. After we ran "Truth Of It All" in the 1993 Kentucky Derby.

A Grolsch Beer glass that was found by me in a Thrift Store in the city of "The Hague" during my 2009 trip to Europe.

I purchased an antique restaurant "Tab" clock. During my summer 2008 trip to Vermont. I did spent some time also in the state of New Hampshire. This clock was found in an Antique and collectible store in Claremont, New Hampshire.

I purchased and brought home a very nice antique maple syrup pitcher. Which was found in the antique mall in Chester, Vermont. This was during my summer 2011 trip in the Green Mountain State.

During my 2009 summer trip to visit the beautiful Pacific Northwest. I found and purchased the Complete Playboy Centerfold Book. In a thrift store in Seaside, Oregon. Lots of beautiful scenery to view in this book.

Then after completing the "Mount Hood Loop". I found myself in Sandy, Oregon. Located on the west side of Mount Hood. There happens to be a "Goodwill" Thrift Store located in Sandy. I found a brought home a nice pair of Schwinn biking gloves. Which are still in use today. I also purchased a working first edition of Bose noise canceling headphones. I think both items only cost me $15. No sales tax in Oregon!

During my stay in Portland Oregon last October. I was perusing through Cameron's Used Books. I found a rare copy of the "Great Vending Machine" book by Michael Colmer.

This Post Card was sent on June 10, 2012, from Martha's Vineyard. This was the last day of my trip to visit the islands of Cape Cod. This post card was sent home. It arrived on July 31, 2012. I thought I would never see this postcard. The old saying; "better late then never". This postcard is an aerial shot of Edgartown and there historic lighthouse. 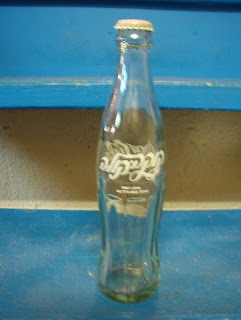 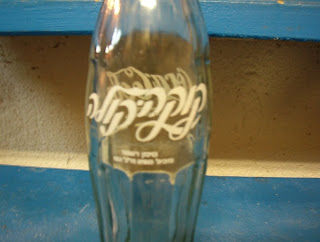 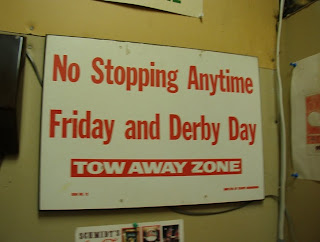 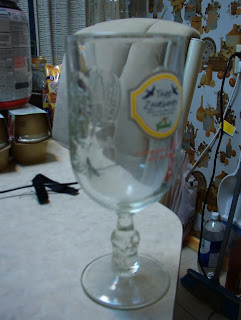 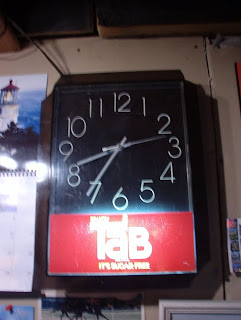 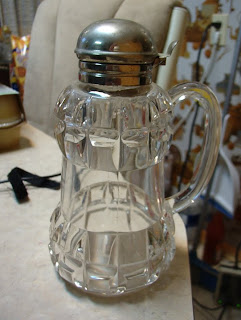 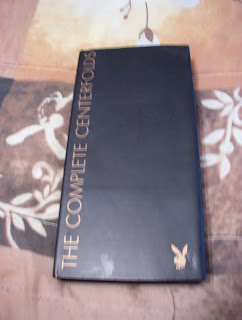 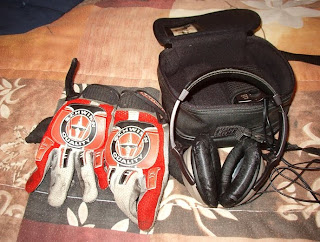 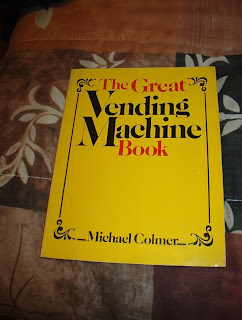 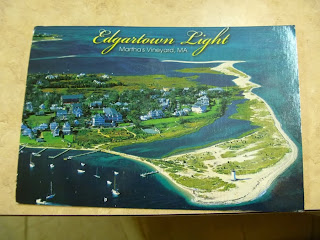 How about a couple of good songs about "Souvenirs". Here is classic footage of John Prine and the late Steve Goodman. Singing about the fun of collecting great memories. Also a not very well known song sung by Jimmy Buffett. That will always help. To bring back some special memories to me.
http://www.youtube.com/watch?v=aOTbg39-I5Q&feature=share 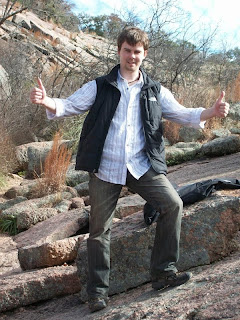 This picture was taken of Mike. After our hike in "Enchanted Rock" state park located in Texas.

Sad to report the death of a good friend and fellow traveler. Mike Bykov who passed away just recently.

I met Mike in 2010 during my February tour of south Texas. Meeting friendly and interesting people is part of the fun of any trip. For if you would of stayed at home. You would have never met some of the people that make the travel experience so rewarding. That become a part of your life! I arrived in the city of Austin. I checked in at the Hosteling International hostel located there. When I met Mike we just became friends right away. For Mike Bykov was a person who had a charismatic personality. Who just loved to live!

Mike was also a very bright and creative person. I could of predicted down the road that Mike was destined to gain a great job. Working for a prominent company. Mike was someone that could of changed our world for the better. For Mike had a lot going for him.

Mike and I shared some great time together even though it was brief. Our hike in "The Enchanted Rock" state park in Texas was a great part of my Texas trip. We also shared a passion for great food, and great beer! We also shared the ambition to travel out into this interesting and beautiful planet we get to call our home. And to enjoy ever minute of the adventure!

This weekend I plan to remember my friend by enjoying one of his favorite meals. That would be an incredible steak dinner. Served with all the trimming. Oh yes and some imported beer from Belgium. I believe Mike would of approved.

The world has lost a great person in Mike Bykov. I have lost a great friend. This thing we call life can be so unfair. Mike Bykov was only 28 years young.

All those that had the great luck of knowing you Mike will miss you! Safe Travels my friend. Wherever you go from here. 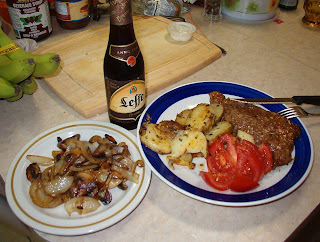 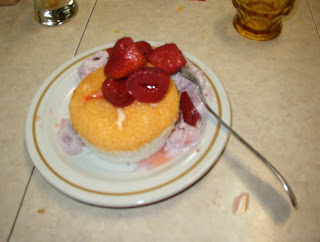 My menu for dinner tonight. Was designed to honor and remember the life of my good friend Mike Bykov.
The main course consisted of a fried Organic Angus Beef N.Y. cut steak. Served with fried mushrooms & onions, garlic & chive home-fried potatoes, and fresh sliced tomato.
The beverage was an imported beer from the Abbey of Leffe, Belgium.

For desert was strawberry shortcake served with mixed berry frozen yogurt. It was a meal to remember. I just know you would of also enjoyed this meal Mike!

A Swim In The Credit River 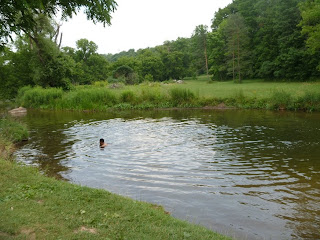 This summer has been a real scorcher. To try and beat the heat, and survive this hot, dry and very humid summer of 2012. I have retreated back to my roots. Back to the country. You can take the boy out of the country. But you can't take the country out of the boy.

Last year during a very enjoyable bike ride along the Caledon Trailway. I rode my bike to the picturesque little village of Terra Cotta located in Caledon. I enjoyed my first swim in the "Credit River". I enjoyed that experience so much. I just have to keep doing it. This location to swim in the Credit River has proved to be one of my all time favorite places to pretend I'm a fish.

Thanks to my waterproof digital Lumix camera. I was able to take pictures of the scerney while I was in the river.

The final picture is of 1887 Cheltenham General Store. I enjoy very much finding an old country general store. Yes and the icecream cone was also enjoyed! 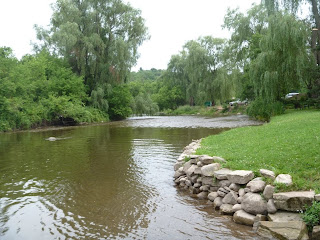 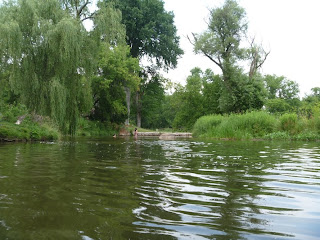 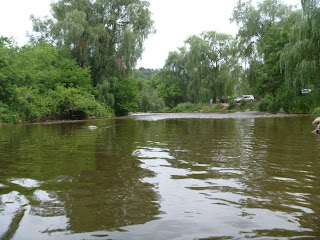 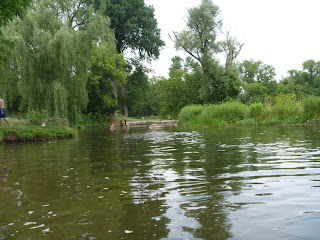 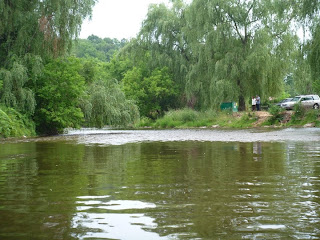 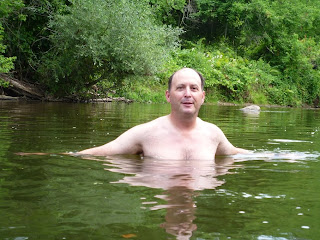 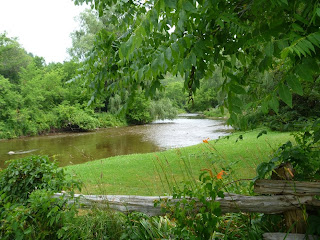 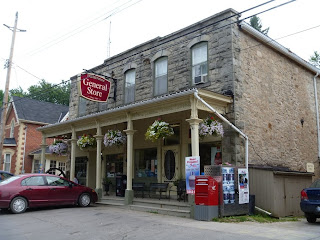